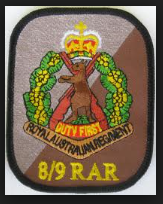 I was in 8/9 RAR for all up around 15 years, so I’m not sure what year it happened. At best guess, um… shit… I’d say 1985?
Anyway, I was in the 8/9 anti-armour platoon and we were on exercise at Shoalwater Bay. It was an offensive-mounted exercise with us and the Gurkhas, because the Gurkhas were mounted in M113 and were doing an offensive operation where there wasn’t a great need for anti-armour. Around 1400 hrs, The Gurkhas got reacted and were sent to attack the enemy, so they boarded their 113s and were off. We simply followed them fairly close behind, which was a dick drag, because we ate bloody dust for around an hour. We couldn’t see in front of us for most of the hour. Anyway, the Gurkhas found the enemy, did their attack and won the day – all good. The Gurkhas were ordered back and the anti-armour element was to follow again. As we were driving back, I was the detachment commander, Gerry Winton (later to go to SASR) was the driver and Andrew Thompson, the gunner, seated high and behind me in a short wheel-based Land Rover with the 106 RCL.
Well, we were driving for about 20 mins when all of a sudden I noticed out of the corner of my eye that Gerry Winton had fucking jumped out of the Rover. I looked at our driverless vehicle and yelled, “What the fuck are…?” and that was as far as I got before seeing this frigging huge snake’s head about six inches from my leg. I instinctively grabbed the headset, tore it off and jumped out of the vehicle. After hitting the ground, I stood up and watched the vehicle still moving forward, with Tommo the gunner still sitting where he was supposed to, wondering why the fuck everyone had gone AWOL.
Anyway, the vehicle hit the M113 we were following; Tommo toppled into the front seat, which I had vacated. We ran up, thinking old Tommo’s been bitten to death by this bloody snake. We found him literally lying completely forward, all crumpled up, with his head where your feet go and his legs sticking out the top of the vehicle. As we basically tore him out of the vehicle, he was still abusing the living fuck out of me and Gerry for jumping out of the vehicle. Finally, we realised he hadn’t been bitten and were trying to tell him about the snake. He replied that it was bullshit and what fuckheads we were.
Then the M113 commander came over, asking what the hell was happening while Gerry and I were looking for this bloody snake. As it happened, the snake did appear, but not in the front seats or near the gearstick, which was where I’d last seen it. It came out from under the forward panel above the tyre. It travelled maybe a foot, when I think it was Gerry hit it so hard with a machete that it took the snake’s head off and left about an 8-inch gash in the metal. When the 113 commander saw this, he started to laugh. Tommo looked somewhat in horror and stopped calling us fuckheads, instead saying, “Why the fuck didn’t you warn me?”
We all started to piss ourselves laughing – except Tommo. This all happened in a matter of minutes.
Prologue: Tommo didn’t speak to us for some days. The snake (can’t remember what is was. Brown, I think…) around, um… maybe five or six feet long, was thrown some hours later amongst the Gurkhas who were lining up for dinner. They cleared the meal area quicker than they had the enemy position. We now had one fucking angry QM wanting to know who the fuck was responsible. We slowly left the area that would have made you proud. Anyway, never sure how the snake got there, but some believed it had been knocked into the vehicle by the 113 knocking trees and shit everywhere, or it was simply in the vehicle.

Quote!
A sucking chest wound is Nature’s way of telling you to slow down.