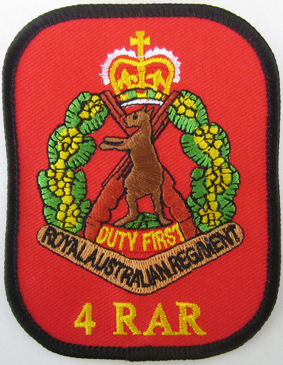 BOREDOM IN BARRACKS By Steven D’Cunha, B Coy 4 RAR

RCB trip to Malaysia with B Coy 4 RAR in 1996. We travelled to Hua Hin, Thailand as a company to work with the Thais. Most of the day went in demos – both ours and theirs. There seemed to be a lot of downtime as we lay around the barracks during the day. We were only allowed to drink after knock-off (after 1600) so during the day we’d play cards – mainly 21. When money ran out, a couple of guys, Crofty and Case, invented playing cards for dead arms (punching a guy’s arms for the amount they’d lost) since we didn’t have much cash. We all participated till we’d had our fill of numb arms from being punched, but those two kept playing till they literally couldn’t move. It was a laugh for us as we just watched these two punch the hell out of each other’s arms. Finally, when they’d had their fill, they sat down and Crofty started picking his nose. He pulled out this beaut booga. It was the size of your thumbnail, filled with solid and mucus substance. It made me squirm but not Crofty. He saw an opportunity to place another bet. He bet Casey some significant amount of money that he couldn’t eat his booga. Casey, without hesitation, grabbed Crofty’s hand and put his booga-covered finger into his mouth. He sucked the booga out of his hand, bit it between his front teeth so we could see and swallowed it. That left all of us gagging and as for me, I was dry heaving, dry retching until I spewed some of my lunch. To this day I tell that story to my guests at a party after I’ve had a few drinks. It always gets a great reaction. As for my Mrs, she knows when I’ve had a few Scotches that this story will come out and pre-warns me cos she dry retches every time. My Mrs always says, “You Army people are crazy.” To which I reply, “No, not Army people, only Infantrymen.”

Quote!
Teamwork is essential; it gives the enemy other people to shoot at.

This is the true account about a very eventful night...
16+ Language Warning