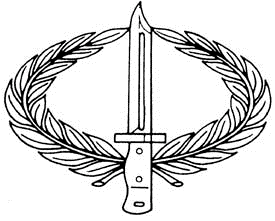 There’s just something about the Infantry. The more things change, the more they stay the same. The men of the Infantry live as they always have. Endless road marches, mud, rain, snow, sleet, sand, crappy food, last-minute missions and no sleep are just the beginning of what is expected. There is a shared knowledge that you signed up for the hardest job in the military and excelled. You carried your load, embraced every challenge and if necessary fought alongside your brothers in arms in a way others will never understand. It’s a brotherhood that lives across all generations. An Infantry soldier will never claim to know what a Vietnam War or Korean War veteran went through, but he can at least land within the eight-digit grid. We donned the crossed rifles and Skippy badge and became something greater than we ever thought possible. Some of us gave the ultimate sacrifice in defence of our brothers in arms and the country at large. And whenever we think of our fallen gravelly- voiced, barrel-chested, steely-eyed lost brother, we have to believe that Infantrymen don’t die. We regroup in hell and kill the enemy twice.
That is why every other corps is so envious of the Infantry Corps. God bless the Grunts. A lot want to be, but a hell of lot will never be.