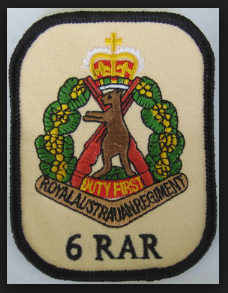 Posted at August 30, 2018 in Uncategorized by admin Comments Off on EX TANDEM THRUST By Russell Nastasi, 6 RAR

In 2002 the Australian Army, along with US defence forces, engaged in Ex Tandem Thrust, which took place in the Shoalwater Bay Training Area (SWBTA). At the time I was serving with Bravo Coy 6 RAR and we had been tasked to play enemy against some 25,000 troops. We spent the majority of the time digging in dummy company positions to try and fool our opposition’s intelligence assets.

After three weeks, with the ex nearing an end, my platoon (4 Pl B Coy) was tasked with being the Battalion HQ (BHQ) protection party. On the first night of the tasking we posted listening posts (LP) and began developing our defensive position. My section was tasked to defend 4-8 o’clock along the perimeter. At around 2200 hrs LPs were bought in. We got the order to stand down and the night’s piquet roster began. I retired to my hutchie located at the 8 o’clock position.
At around 0030 hrs I was woken by the off-coming piquet. I put on my gear and headed off to the gun pit. Not long after taking my position behind the gun, I started hearing noises outside the perimeter, with a heightened awareness of the fact that we surely had to have contact with the enemy prior to the end of ex. I tightened my grip on the 5.56 mm belt-fed Minimi LMG and awaited further activity before either engaging or “standing to” the position. After about five mins everything quietened down and both of us on piquet decided it was an animal moving around. At this time I decided to check the list to see what time my shift finished and whom I was waking up. To my surprise my piquet wasn’t due to begin until 0300. At this time, with my blood boiling that my sleep had been stolen, I moved back to my hutchie and woke the bloke who’d woken me by dragging him from his sleeping bag, I politely informed him that he could finish his piquet and then do mine for my inconvenience, positively reinforced by the risk of some dead ground counselling if he didn’t comply.

I had just managed to fall asleep when there was a loud rustling outside caused by someone falling into the hutchie next to mine. Believing it was the piquet offender, I duly checked my watch for the time and in an aggressive whisper informed him that my shift couldn’t have been finished and to get back on the perimeter. The response I received was one that I could never have expected; the offender turned out to be Gav, one of the fellas from another section positioned between the 12-4 o’clock positions. He asked where he was and then told me his tale of woe. He had been on the first piquet shift from his section and had got lost in the scrub while trying to find his hutchie. After moving around in the scrub for an hour, he decided it best to hold up the night and try and find the position in the morning. He then proceeded to tell me he’d been attacked by some sort of animal (the noises I’d heard whilst behind the gun) and felt it safer to blindly find the position.

Military Cooks
Within the Army, the cooks were known as ‘Fitters & Turners’ for
their ability to fit food into pots and then turn it into “Shit”.

Officers with a Map
It was often said that the most dangerous person in war was an officer
with a Map & Compass.

Quote!
The complexity of a weapon is inversely proportional to the IQ of the
weapon’s operator.