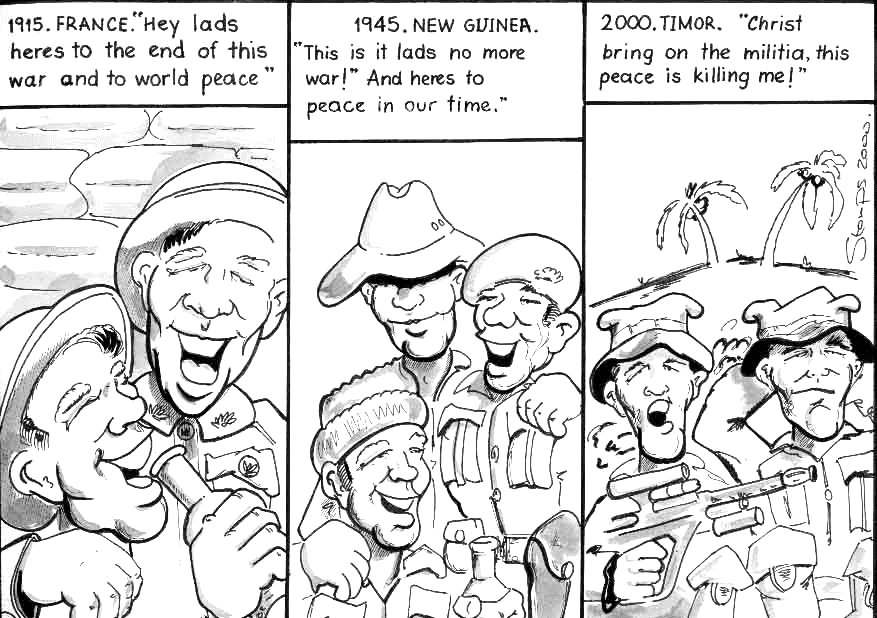 During Kangaroo 89, 3 RAR played enemy and we had a ‘non- exercise’ base at Fenton Airfield, Northern Territory. One day when my platoon (which was Mortars but playing riflemen) was back there, I was sitting in the mess having a brew and watching CO Willis give an interview to a bunch of reporters, when all of a sudden we could hear the commands “Load, Action and Instant” being yelled out from behind the mess.
All the reporters ran around the back to see what was going on. I stuck my head around the corner as well, just in time to see our Int Sgt, Sgt Pincinelli, dressed as a cook, tied up and blindfolded, facing a firing squad.
As the reporters came to a stop, the commander yelled “Fire” and they shot the cook. Sgt Pincinelli fell to the ground, spitting blood. All the reporters turned to the CO asking why he’d been shot. Why was he executed? etc. etc. The CO looked at them and replied, “He burnt the pikelets.”
The reporters all started saying, “What? Burnt the pikelets? That’s a bit harsh, isn’t it? Execution?”
The CO just gave him his stony look and said, “Twice.”
I was struggling to keep the laughter in at this point and had to leave.
The other story going around at the time was that CO Willis walked into the Katherine Police station, opened up with his M16 and said, “We’re here,” and left again.