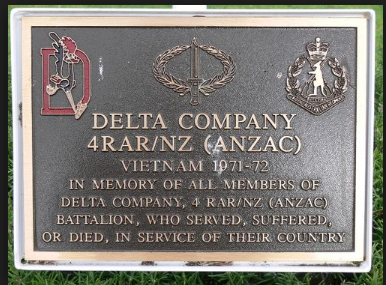 Posted at August 30, 2018 in 16+ Language Warning, Uncategorized by admin Comments Off on NIGHT ATTACK By Ray Davis, 4 RAR/NZ

At Nui Dat, the tents we lived in had 4 ft sandbag blast walls with some wood posts in the walls to help support the canvas roof and walls. The tents held four metal beds that ran along two walls on each side of the room. We were fortunate to have electricity. The blast walls of our place were more than two foot thick reinforced with corrugated iron and the only opening in them was the one door at the front.
A big rat lived in the sandbagged blast walls and every once in a while it would tunnel into our room. We proved to be inept at throwing bayonets at it when it did this. One of my roomies, John Mason, who slept on a corner cot near the door, had an old wooden box (105 mm ammo box) on a post in the wall about 4 ft above his cot. He kept some things in it like stick books, mail, writing material and such like. On top of the box he kept some loaded spare magazines for his SLR (rifle) and a few tins of “Yank” C-rations.
Well, just imagine all four of us sound asleep in our small room and being woken about 2 am by someone in our room letting out a blood- curdling scream. Needless to say, all hell broke loose in our tent. I immediately sprang out of my bed, only to hit my head on the centre table and then Colin Havers getting out of his bed across the tent from me. I hit him so hard that I knocked him back over his bed and against the wall behind him. Bob Meehan, the other bloke in the tent, managed to stand, only to trip over me and I found myself knocked to the floor. We all scrambled for our weapons. During this, someone in our tent continued to scream.
Finally, after what seemed an eternity of chaos, someone in our room found the cord of our light switch for our lone light bulb and turned it on. John Mason was on his bed, holding his crotch (the family jewels) with both hands while he rolled side to side on his bed, still uttering sounds that told you he was in great pain. Next to his bed on the floor lay one of his large C-ration cans.
It seemed the rat had made a new tunnel in our tent during the night, came out and climbed on top of the 105 mm box. There, it had knocked off one of the cans, scoring a direct hit on John sleeping below. One or two of us may have shit our daks that night. Also, it was a good thing we were all young men for an older one might have suffered a heart attack from hearing John’s blood-curdling screams. In the few seconds of mayhem in our small home away from home, we could have seriously hurt each other while scrambling out of our beds in that completely dark small area.