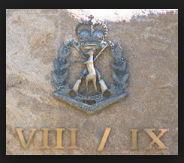 Posted at August 30, 2018 in Uncategorized by admin Comments Off on RECON PLATOON EARLY ’80S By Percy Angilley, 8/9 RAR

One of the functions of the Aviation Regiment was to support the SASR in their operations by transporting them from ‘A’ to ‘B’ over long distances with the Pilatus Porter and Nomad aircraft. Their drop-offs were normally first or last light and their pick-ups at night-time were called TALS (Tactical Airfield Lighting System). Because of the great distances between each unit and costs associated with these exercises, Recon 8/9 used to fill the gap for training purposes with the Aviation Regiment during the majority of the year.
One exercise we did was in the Galilee Basin, Central Queensland. Our first stop was on two cattle stations and our second stop was at the Carnarvon Gorge National Park – well, the airfield just near it. We got dropped off just before last light and started walking up the road towards the park when we heard a vehicle approaching. We got off the road and Tony Vaughan and Noel Gathercole dropped their gear and rifles and then stood in the middle of the dirt road to flag the driver down. The ute came flying over the top of the small hill in front of us and then lay on the brakes when he saw Tony, nearly hitting him. The driver said, “Gidday, where you going?” We thought this was a stupid question considering it was a one-way road. We started thinking that a second- class ride was better than a first-class walk.
We jumped in the back of the ute and off we went, flying again sometimes off the ground. At the park we were met by the senior park ranger and facilities manager – both females.
“Great timing, there are no tourists in tonight so you can have cabins one to four. The bar is in here; you can drink as much as you like on tap but you have to pay for the spirits. And the BBQ will start in about one hour at the second swimming hole just up the track.”
We dropped our gear, went straight to the bar and then found out that the cocky who’d given us a lift up the track was celebrating his 21st birthday party there tonight and people were coming from as far as 300 kilometres away to party.
So after several drinks we went up to the swimming hole for a BBQ party, as most of the people were turning up by now. We were treated like family and of course some of the boys wanted to talk and handle the M16s that we carried (our magazine with lives rounds were in our pants’ pockets). The night took a bit of downer when the rest of the park staff turned up (all females) and out of the first girl’s mouth came, “Bloody AJs.” You wouldn’t believe it, nearly 500 kms from the ocean and we cop a Brisbane female skeg (surfer) in a national park; this only set back the sliver tongue of Tony for a little while.
The next day we were given a lift down the road to our pick-up airfield – property. The owner was a WWII prisoner of war veteran who hated Japs with a vengeance, so much so that he would not allow any plane to land on his field which carried Japanese tourists. That afternoon he invited us to go shooting with him, as he said he had a roo problem. We told him that we only had a few rounds on us before he pulled out a RAAF ammo box of 1000 rounds and said, “This should be enough for the first paddock.” No questions asked – no answers given.
He took us driving along a fence line in the late afternoon and pulled up about 150 metres from the base of this saddleback feature and stopped. We looked at each other standing in the back of the ute and he asked, “Are you ready!” We looked at each other again, as if to say, “What the hell is he talking about?” and then he sounded the horn and the side of the hill moved. Well, did we have fun! Between the four of us we shot well over 50 roos before the mob escaped over the hill and then went to another paddock and did the same again.
The next afternoon we set up our TALS in readiness to be picked up. These pilots were really good at their job; they had to fly no less than 400 kms, with their last checkpoint being around 100 kms from the airstrip in total blackout (except for their warning lights) and land in a two-minute window only. Remember all the locals we met at the party a couple of nights before? Most of them turned up to say goodbye and watch this crazy pilot land in the dark. Not only them but also two busloads of German tourists – talk about traffic control.
We had them all set up beside the airstrip where the plane was going to turn around for pick-up and take-off and with some translation help they understood that they couldn’t take photos until the plane had turned around and that was okay.
Everyone was standing there in total darkness. We heard the plane flying towards us and then the engines in reverse prop as the plane slowed down. As the pilot completed the turn, 100+ cameras started taking pictures. The plane was lit up and the facial expression on the pilot was priceless; it looked like a slow-motion segment in the movies. We jumped on and were gone.