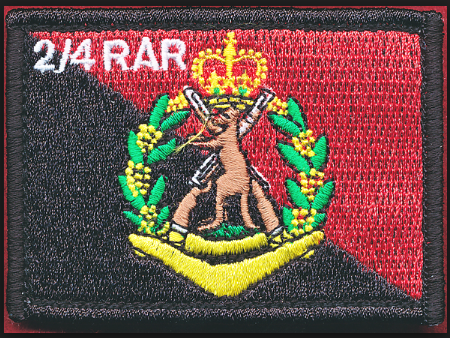 After looking after medics and such, who were allowed to get on the piss every weekend and probably weekdays, I and other grunts had had a gutful. We got a beer every four to six weeks legally in the boozer, as we did all security for these dicks.
Anyhow, Australia Day was coming up and on top of our workload somehow someone up high decided that we would put on a show to highlight Australia to all the top nobs from other countries and visiting government people who would be in country. We had a week of singing practice of some Australian songs. The night came and they let us have some beers. Spirits were high and I might have drunk too much with my mate Craig (Keep) RIP. During the singing on the back of a flatbed truck tray covered by a canvas tarp, I stepped back with him on the canvas, but there was no truck under the tarp and down we fell. We got back up and ended the song. That was just the start. After everything finished, he and I were still drinking, saying stuff like “This is a shit Australia Day… no cricket or streakers…” Then it dawned on us two bright people to streak. So up on the truck we got, dicks out, running back and forth on the tray with our shirts over our heads so as not to get IDed and charged (sounded like a good idea at the time). The problem was that we couldn’t see due to the shirts. I took mine off and said, ‘Fuck it,’ so I could escape the MPs closing in. Craig kept his on; he was a real good runner but not seeing depth, ran off the truck, only to fall at full spread off the back. Somehow he managed to escape to his area, change his clothes, clean his face from the fall and rejoin us having a laugh. He was sore for a bit but all okay. I backtracked and lost the MP in the crowd, got away free, so I assumed.
The next day I was hung over and feeling like death. The OC just happened to see me, called me over and asked if I’d enjoyed myself the previous night. I replied that yes, it had been a good Australia Day – very Australian. He asked if I’d happened to see the streakers, who looked like two people he knew from A Coy. The CO was not happy as he’d been with a government official, who’d informed him how much he’d liked it. When the streakers appeared, the CO had been embarrassed and had gone looking for them with the MPs. The OC said to me that if I knew the streakers, I should tell them not to talk about it so word didn’t get around, all the time smiling and letting me know he knew who they were.
As a side note, he was probably one of the few OCs I really enjoyed working for. The other one took us to Timor with A Coy 6 RAR 2000. Both are good mates and I’ve spent many a hour with 6 RAR OC talking about my old 2/4 RAR one, and all the political stuff that went one behind the scenes on deployments. Both good hands. Sadly Craig (Keep) took his own life around 2003.