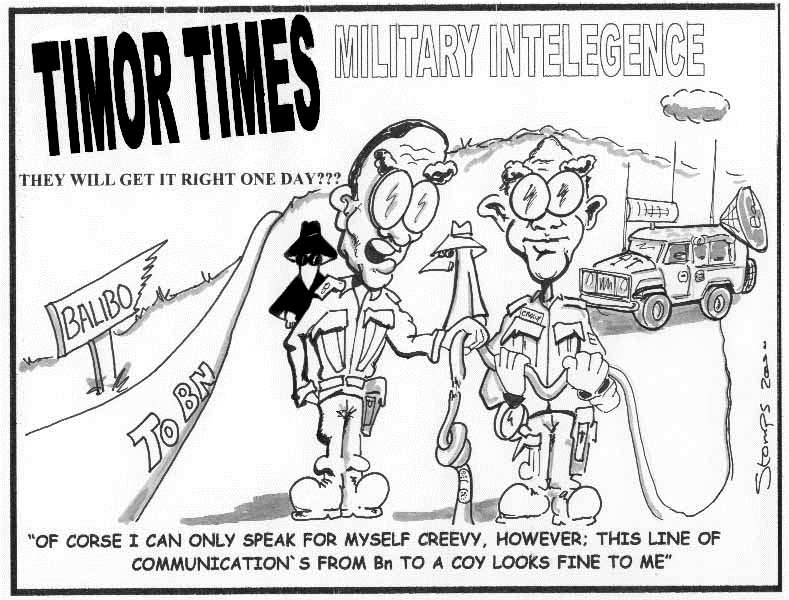 I was in 9 Pl in 2000 and we had been informed that this was our last night in Aidabaletean before being sent to Batugade to man the various border crossings in the vicinity. For a while I’d been looking at something to ‘souvenir’. We had previously been warned that stealing would not be tolerated and disciplinary action would be taken… blah, blah, blah.
So I was wary of taking anything and getting caught. It had to be done with some sleight of hand and complete secrecy. The perfect opportunity to get my ‘battlefield souvenir’ came on this night. I was on piquet at about 0200 on the front guard tower. Tied to the tower with a bit of hootchie cord was a makeshift flagpole (made of bamboo if my memory is correct) which held up the UN flag. With the assistance of the other bloke on piquet we untied the pole. He stayed in the tower acting as a counterbalance for the pole (so that the pole was never actually removed) and lowered the flag end to the ground. I climbed down from the tower, untied the flag, folded it up and put it in my pocket. When the piquet was finished, I woke the next bloke but instead of going to bed, I went and put the flag in a box, addressed it to myself and put it in the outgoing mail.
The next morning we left and B Coy took over. Later that day the CSM confronted us all. “Alright, which one of you cunts took the UN flag from Aidabalatean?” I was a bit nervous now but was feeling okay as my assistant of the previous night was not around and nobody else would have known… unless they were up having a piss or tac durry… now I was nervous. I waited for everyone’s response.
There wasn’t a response initially, then a miracle happened. My platoon sergeant swore to the CSM that he had seen it on the flag pole when we’d departed at 0600. There was a bunch of murmers of “yeah, yeah” and “I saw it too” and a general consensus that the flag was on the pole at 0600. I remained quiet. The end result was that those Bravo bastards must have knocked it off and were blaming it on the poor innocent good doers of Charlie. How could our CSM not believe us?
It wasn’t long after that news got back to us that the B Coy guys had been called out on parade with all of their gear, stripped down and a thorough search had been conducted to retrieve the missing flag. Sorry for the fuck around, fellas but it had been about 20 metres away from you all along, sitting in a box waiting for the mail to be sent out!
***
I went to Afghanistan in 2009 and had been in Tarin Kowt only a couple of days (we were still being inducted to the area). I was walking back from the mess with another bloke who had been there a couple of years before. He suddenly stopped, about turned, and got down on his hands and knees to look under a shipping container. He reached in and dragged out (what I thought was) an old rag. When we got back to our tent, he unfolded an RTF3 or RTF4 flag, (we were MRTF2). Then he told me the yarn. He’d knocked off the flag a couple of years ago. The story got out that the RSM of the battlegroup was going to search the unit to retrieve “his” flag. My mate quickly stashed it under this shipping container and the flag had never been found. It took a few years but he eventually secured his battfield souvenir.
This bloke was Armoured Corps.