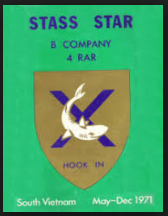 Posted at August 30, 2018 in Uncategorized by admin Comments Off on URBAN MYTHS & LEGENDS By Bob Meehan, 4 RAR/NZ

On arrival at Nui Dat, South Vietnam, where the 1st Australian Task Force (1 ATF) was situated, many of the new troops were informed of all the amenities within the area, ie where concerts were held, outdoor movies were shown, the location of the library, the Red Cross and Everyman’s hut. They were also informed of other popular social events outside the base that they could attend, thus providing interaction with the Vietnamese people. Two of these activities were the Dat Do Dogs and Hoa Long Dance.

The details covering transport, dress and weapons were presented on unit noticeboards.
There were some rules that were required before you could attend these two activities. You were required to put your name on the list, generally administered by the company sergeant major (CSM), be at unit head quarters (HQ) by 1630 (4.30 pm), dressed neat and tidy in civilian dress (civvies) where the CSM would inspect you before you boarded the truck or bus to be conveyed to your destination.

Village of Dat Do.
The Dat Do Dogs provided a chance for those who liked to have a
punt on dog races, as there was no horse racing facility within Phuoc Tuy Province. These would be a poor man’s races, as most of the Vietnamese were poor. It was a place to have a bet on the “Dish Lickers” on a Friday night.

Village of Hoa Long.
The Hoa Long 50/50 Dance was held every Saturday night at the Rice
Mill within the village of Hoa Long. The information given on the noticeboard informed everyone it was a great place to meet and fraternise with the local indigenous females. Young South Vietnamese ladies supposedly sponsored the dance for the Freedom and Democracy Association of South Vietnam.
Copious amounts of local alcohol were available at both these venues at ridiculously low prices; it was advised that they support the local economy. The only rule was that they could not be involved in trading of cigarettes for the young ladies’ favours. Especially menthol cigarettes like Cool or Salome brands. The CSM also warned those attending the Dat Do Dogs not to eat the local food, especially the “Heppo rolls” as most losing dogs were usually eaten.
The fact that it would be after dark and could be teeming with VC escaped them!

When Friday/Saturday evening arrived, they would parade ready to go outside the orderly room, company HQ. After being reprimanded by the CSM for not having boots shined etc, they would be taken for a brief drive around the task force area. On returning, members of the unit would line up at the HQ and give the blokes an unceremonial welcome home from the dance!
Both these activities were “Furfies” and provided great fun and amusement to those who watched the procession of naive and inexperienced soldiers lining up outside HQ to be inspected by the CSM and of their sheepish return.

Dapto is a southern suburb of Wollongong in the Illawarra region of New South Wales, Australia, Perhaps the area’s most famous attraction is the Dapto Greyhound Racing Club, colloquially and affectionately known as the ‘Dapto Dogs’. This spawned the comparison with the Vietnamese Village with a similar sounding name.