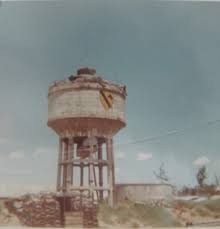 Posted at August 30, 2018 in Uncategorized by admin Comments Off on VIET CONG SNIPER By Anonymous

The village of Hoa Long straddled one of the major roads within Phuoc Tuy province – Route 2. Most of the military traffic heading south to Baria, the capital of the province or to the port city of Vung Tau or north to Saigon, South Vietnam’s capital, had to pass through the village. A very high tower which held a water storage tank dominated the skyline. This tower was an ideal position for a sniper, as it gave an extensive view of the approaching military vehicle in both directions.
Over the many years that the Australian Military forces used the road, it was reported that vehicles were fired upon numerous times from a Viet Cong soldier using the tower as his firing position. Even though the military could have eliminated him many times over the years, the Australian military authorities reasoned, as he had never come close to hitting a vehicle, let alone a person, it was commonsense to leave him be, in case he was replaced by someone with far more accuracy.