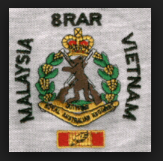 In 1971 I was posted to 8 RAR who were then still on leave after returning from South Vietnam. When the battalion returned, the war was still on, even though there were rumours that the Yanks were going to pull out. We all realised that if that were to happen, Australia would bring her troops home too.
In the meantime it was full-on training and preparing for war – lectures, drilling, running, drilling, shooting, and training. It was hard and continuous. The tough bush exercises came one after the other. My sergeant, Bruno Flemmati, told me that it was far easier in Vietnam than it was in Enoggera, and I believed him. We spent weeks on end in the middle of thick jungle, eaten alive by leeches and mozzies and cooked by super-heated air. Bloody hell, only young, fit and conditioned men could put up with those conditions for long periods.
I had some laughs though and met some of the most delightful and decent young men around. I wish I could remember their names; it would be great to get in touch with them. Private Peter Webber was our gunner and the funniest bloke in the platoon. He is a magistrate on the Gold Coast now and going strong.
Because of the Vietnam War, we didn’t have too many helicopters left to train with so we were reduced to Corporal Zunt Morrison sitting in an open Land Rover parked on the playing fields at Enoggera, swinging a toggle rope with a full water canteen tied on the end around his head. This of course, represented a Huey chopper and we had to run in under the rope (Blades) and mount the chopper (Land Rover).
Another time we were all up in Mount Glorious doing a battalion attack. Corporal Ross Kenny MM had his section attacking a feature and my section was in support. We had no blanks and had to shout, “Bullet Bullet,” and if we carried a machine gun or SMG we yelled, “Heaps of bullets.” My section commander, Corporal Cliff Bond, an Aboriginal, shouted out, “Throwing bayonet,” and we all cracked up. There was green-clad jungle killers rolling around the jungle floor laughing, fit to bust. Incredible really; we were in full training for war and yet could still laugh and fall over in mirth at the comic situations we sometimes found ourselves in.

I remember once, we got into a position late at night and had to dig in. We started digging and about four hours later I noticed the National Serviceman next to me (Doozer Williams) had hardly got down at all. In the cold grey light of dawn we saw that his entrenching tool had bent over, and the poor bugger had been banging the hard clay with what could only be described as an entrenching hammer.
I was the forward scout in 5 Platoon’s B Coy 8 RAR, and as such I had to walk out the front of the patrol. In those days I had very good eyesight and an ability to see through the bush, no doubt from living at Donvale where I spent most every hour in the woods. I pushed through some thick scrub that was made up of springy saplings. I let a long one go and realised in an instant that the poor digger behind me was going to wear it.
I turned to warn him, but he spotted it and ducked. The unfortunate first rifleman wore it right across the forehead. It happened in slow motion and afterwards it was hilarious. All I saw was a surprised look on the digger’s face and then he was swept off his feet flat onto his back. He then got the nickname ‘Tangles’. Private Bob Noonan was his name.
Exercise followed exercise and we became polished and very sharp at drill, weapons and platoon and section tactics. Vietnam was still rolling along and I was hoping to get a trip and earn some medals. My chance came in the form of ‘Saigon Guard’. Soldiers were going over to protect Saigon whilst America and Australia pulled out. I put my hand up and felt confident I would get picked because of my scouting skills. Love, however, was to stop me.
My hopes of going off to war were dashed when my RSM, H E Smith came up to me one day and said, “Moose, you’re staying. I want no diggers with girlfriends going over to that bloody place.” I protested that I didn’t have a girlfriend; in fact I was a near virgin.
The RSM had spotted me with my mates’ (Private Neil Hills) little sister Karen, at a battalion ball and assumed, quite prophetically, that she was my girl. He was sort of right because Karen was to become the love and light of my life and my beautiful wife of 41 years. I didn’t go off to war, but was left to wonder if I would ever stand up to the supreme test. Still don’t know for sure although as a police officer I have been shot at, slashed with a knife and called a heap of names.
I feel so very fortunate, however, that I served with Vietnam Veterans and still feel like a younger brother at some of our get-togethers. The likes of Alan Norcot, Doozer Williams, Ross Kenny, Bruno Flematti,
Lofty Wendt, Cliff Bond, Cliff Savage and so many others remind me often that I am a part of a massive Band of Brothers, and I love and relish my time in the regiment.

GREENBANK SUBJECT 1 AND 2 FOR CORPORAL By Chris Nelson,…

When I was on my subject course for promotion in...
16+ Language Warning